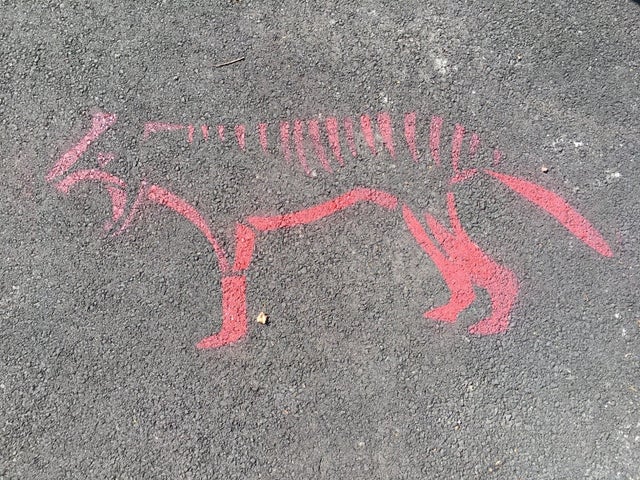 The Edge of Extinction is a pavement mural on the street in Brunswick Heads in which each species will be colour coded for extinct, critically endangered and threatened.

Three Australian species went extinct in the last decade and 1800 species are currently on the Australian critically endangered list. In the face of obsolete Australian laws, we witness no current government action to prevent the looming disappearance of hundreds of species.

The artist Kassandra Bossell will use numerous stencils of critically endangered species endemic to NSW and the region of Brunswick Heads specifically. Members of the public will be offered to participate in creating the mural using spray paints and stencils.

Like a murder victim at a crime scene, the trace of each species takes its place as a part of a ‘river’ meandering along the path. Mammals, birds, reptiles, amphibians, arthropods, fish, molluscs and echinoderms will have their names spelled out on the pavement with chalk.

With strong focus on community engagement in her art practice, Kassandra has a long history of regional art projects and political art production and activism, having contributed signature art works to major political activations, protests and events. These include work with Greenpeace, Amnesty International, Get-Up, Lock the Gate and self-organised street performances using political masks and costumes.

In the face of The Sixth Mass Extinction, the loss of habitat and species causing depleted biodiversity is a shared concern, a part of our local cultural landscape manifested and strengthened by this project. This pavement mural serves to build community by connecting the diverse residents in a creative political action crossing all divides.

The activity will be accessible to children, elders, differently abled and all adults The numerous schools in the local districts will be notified of the times and locations of the project so they may incorporate participation into their learning programs.

As a community-made project, it unites participants around a pressing current issue, lending hope through awareness, embedding memory through engagement and providing a sense of local ownership through communal activism around a common theme. Such collaborative activism will appeal to the public because it focuses on local endangered organisms in nearby environments. By extension, visitors to the area will also learn about the endangered species and the local expression of care for them. This grass roots activity assembles the community through a ground-inscribing engagement to produce a sense of caring for the environment, belonging to it and doing something about it. It provokes questions about Australia’s ongoing involvement in the Climate Emergency.

Created in brightly coloured water-based outdoor paints, the outcome will be an ephemeral community artwork. The Edge of Extinction will become a cultural marker for pedestrians, a memory trigger for those who participated in the project.

Forty-three threatened animal species have been recorded in and around the reserve. Humpback whales can be seen off the coast during the migration period, and the world's smallest fruit bat called common blossom, which is just 6cm long, can also be seen. Other animals include the grey-headed flying fox, wallum froglet, long-nosed potoroo and koala. Critically endangered loggerhead turtles and vulnerable green turtles sometimes nest on New Brighton Beach. Brunswick Heads Nature Reserve is also home to threatened pied oystercatchers, sooty oystercatchers and beach stone-curlews.

This work is Not For Sale.